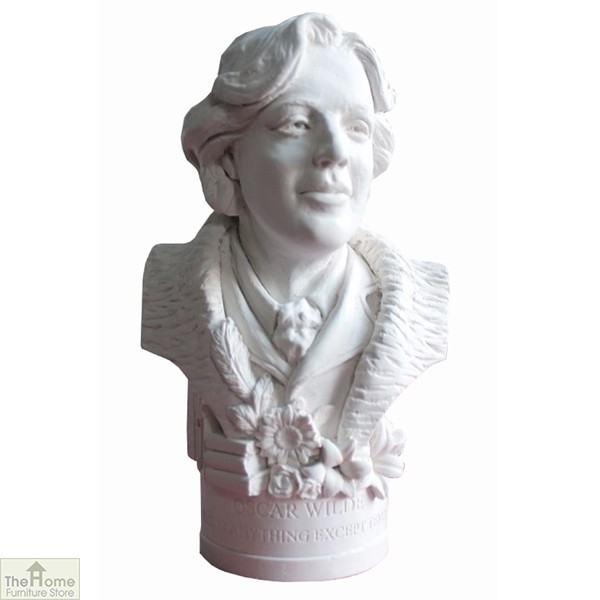 Oscar Wilde Bust Ornament is one in a range of exquisitely detailed ornaments and bookends depicting famous historical figures and characters. Measurements: H12cm.

Oscar Wilde Bust Ornament was an Irish playwright, novelist, essayist, and poet. He is best known for his works including ‘The Importance of Being Earnest’, ‘The Picture of Dorian Gray’. He was one of London’s most popular playwrights in the early 1890’s.This detailed bust has been hand-sculpted from gypsum plaster using photographs of the time. The base features some of the objects associated with Oscar Wilde, including the frame from Dorian Gray, a prison cell door from Pentonville Prison, lilies, roses and a sunflower, books and quill pen and the iconic handbag as featured in ‘The Importance of Being Ernest’. Etched around the base reads ‘I Can Resist Anything Except Temptation’, as well as the name ‘Oscar Wilde’. A wonderful gift for anyone who has an interest in British history and writers. This ornament would make a wonderful decorative piece or a gift for anyone who has an interest in the famous author.

Please note: If the item is returned as not wanted or not suitable, the buyer is to pay the return postage. If the item is damaged or faulty, a photo will need to be provided.

Although we have tried to represent the colour of this product as closely as possible in the photos, due to different monitors the colour on screen may appear different from the actual product.

Our showroom is currently closed due to COVID-19 but we continue to despatch online orders.

By submitting your email address, you agree to receive offers from The Home Furniture Store in accordance with our Privacy Policy.  Unsubscribe at any time.